All around the world the Gay community takes to the streets to celebrate and to promote our right to self expression and self pride in the face of intolerance. Every city is different and unique; in the mid 1990’s I attended Tokyo Gay Pride… there were more folks in the parade than watching. 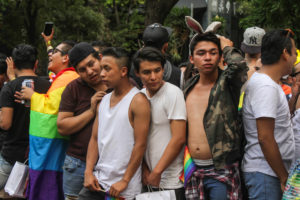 If you subscribe the the belief that Gay folk are not happy and/or  welcome in rural communities (which is a stereo type of it’s own), or that LGBTQ folks have a natural tendency to move to large vibrant cities it is easy to understand why CDMX attracts so many members of the community from across Mexico and the Americas. I believe there are plenty of Queer folks in rural areas and many of their neighbors are tolerant and welcoming. Big cities have big parades and there are not many cities bigger than CDMX. 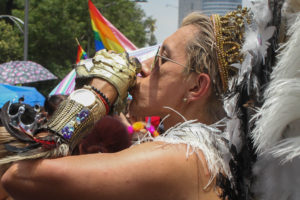 My friend Guillermo  took this photos of the CDMX pride parade. These are 60 images that show an incredible breath and depth of diversity within the LGBTQ community in Mexico. All photos by Guillermo Angulo, CDMX, June 2017.